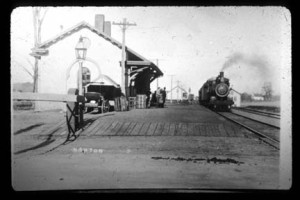 The East Norton Railroad Depot was built in 1853 and designed by the noted Gothic Architect Richard Upjohn. Upjohn was noted for his Gothic Revival churches. The Trinity Church on Wall Street in Manhattan NY is one of his most famous works. The East Norton station replaced an older depot which stood nearby. A stop on the New Bedford and Taunton Railroad, the station witnessed up to fourteen passenger trains daily traveling this line. The Taunton Branch Railroad was constructed between 1835 – 1836, and connected with the Boston and Providence Railroad in Mansfield. When completed in 1853, the East Norton Station was receiving three passenger trains daily between Boston and New Bedford.

The East Norton Station hosted many travelers over the years, and many played an integral role in not only local history, but the history of our Nation as well. One noted Traveler who very likely stopped at the East Norton depot was then Congressman Abraham Lincoln(Future President of the United States), who traveled the New Bedford and Taunton Railroad in 1848 on a visit to Taunton. Although, the current building was not yet constructed, the original Depot stood nearby, and it is very likely Congressman Lincoln stopped at the depot on his journey to Taunton. Another noted visitor who was known to Lincoln was Frederic Douglass. Douglass was an Abolitionist and former runaway slave who addressed the people of Norton on a visit before the Civil War, and who traveled the Taunton New Bedford Railroad.

When mail started arriving daily by trains, the East Norton Post Office was located in a small building nearly opposite the Station, and moved into the depot in 1926. In 1903, the original Telegraph Office was located in this station. Lifelong Norton Resident Mr. Charles Bruce was the Station Agent for this depot, serving in that role for over 45 years. Mr. Bruce was also Post Master for East Norton. The East Norton Station remained and active and busy depot until passenger trains on this line gradually diminished, and the Railroad closed in 1952. In the early 1960’s, the line was dismantled, and most vestiges of the original Railroad were removed. The East Norton Station has a history spanning over 160 years and played an important role in history of Norton.